Esbjörn Jagebro, the former CEO at Falck, started at Naava as the new Country Manager in Sweden in the beginning of October. We are excited to have him join our team and share his sales knowledge with us, which will contribute to our goal - to bring nature inside all around Sweden.

Esbjörn was ready to face new challenges. His decision to join Naava was based on shared values: improving people’s health and wellbeing. 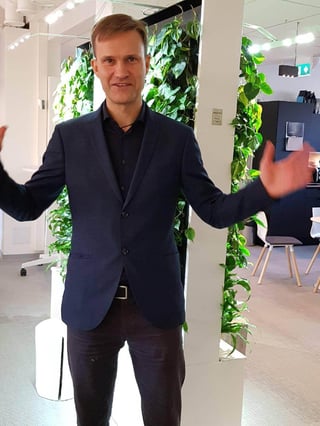 “My interest in health and wellbeing is the biggest reason behind my move from Falck to Naava. During my years as the Sales Director and CEO at Falck, I struggled with low energy levels and lack of focus due to a bad indoor environment. That is why I think Naava is a very good innovation  - it improves people’s everyday wellbeing.”

Esbjörn has big plans as Naava’s Country Manager in Sweden: “My expectations are that our growth in Sweden will be tremendous next year. We will develop a successful strategy for the Swedish market, where we can utilize the incredible already established partnerships, the wonderful product and the well produced web content in a more rhetorical way when we communicate with our clients.

Furthermore, Naava will design and open a new showroom in Stockholm, as Esbjörn strongly believes in the power of first-hand experience when it comes to truly understanding the effects and benefits of Naava. “We want to make it possible for anyone to come and experience Naavas in real life,” says Esbjörn.

“Right now we are busy building a strong foundation for us to grow tremendously from. We will do new things, think outside the box and work in a more modern way.”

More than just a green wall

Esbjörn thinks that it is extremely exciting how hard it is to define Naava: “Naava is not just a green wall, but it is also a piece of design furniture, as well as a product which enhances your health. The visual effects are easy to describe to the customer. However, a challenge occurs when we want to communicate the aspect of Naava really making a difference on cognitive abilities.”

Esbjörn goes on to describe his own experiences with Naava: “The first day I got home from working at Naava, something felt a bit silly. I was not tired, but instead I felt energized. I didn’t need to go and lay down for 10-15 minutes as I usually do when I get home after a long day at work. And this is what it has been like every day since I started working in environments where Naavas are present."

Esbjörn’s career within sales started at a market square selling potatoes as a twelve-year-old boy. Already at that point, his talent within sales was noticed. In addition to selling potatoes, Esbjörn also started his career within sports back then. Ergo, at this young age, he started developing two characteristics which would take him far: sales talent and a winning mentality, which have made him excel at everything he does.

After having worked in sales within lots of different areas, from potatoes and cookies to newspapers, financial solutions and alarm systems, one can say that Esbjörn has a broad understanding of the line of work.

As already mentioned, Esbjörn is very passionate about health, and has a few personal tips that he would like to share with you: