Naava green walls are easy to install and move, and topped off with automation so you can design green interior solutions that stand the test of time.

Naava's polished, Nordic and minimalistic design has been created to bring the effects of nature and fresh air indoors. The main focus remains on the lush beauty of the plants, while hidden inside the frame there are various functions enhancing the ease of use from artificial intelligence to automated irrigation.

Naava product family covers a wide range of options from wall-integrated to free-standing, tall or low, one- or two-sided models,  enabling nature to be brought indoors effortlessly. 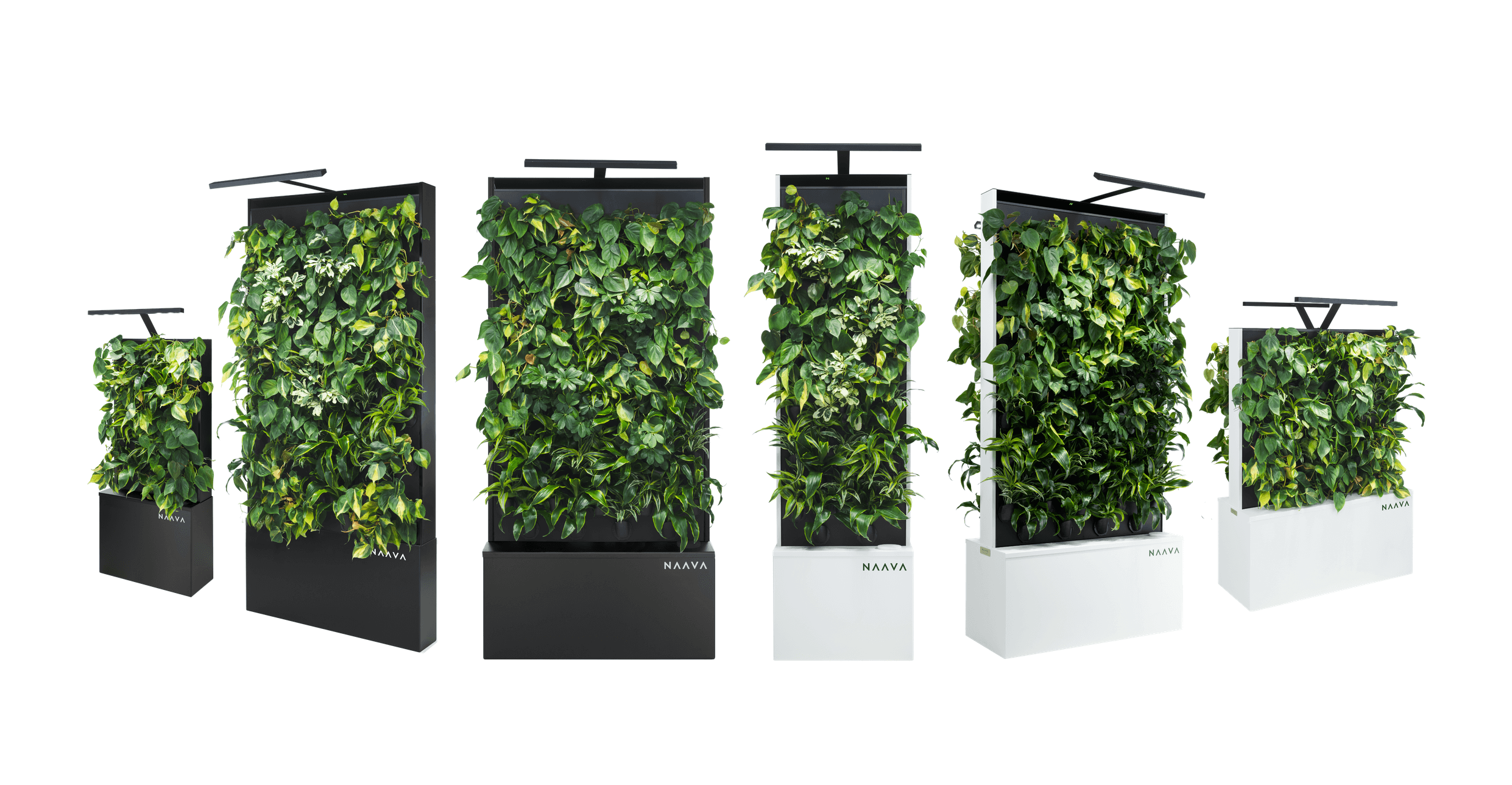 Download 3D models as an .skp and .dwg files.

Create nooks of privacy to the space by using Naava as a space-divider.

The modular design of Naavas enables you to create larger, more striking entities. By placing different sizes of the same model side by side, you can effortlessly create an element to remember, by embedding Naava to the wall it blends in with the space even more seamlessly.

As Naava's are not connected to a plumbing system, they are easy to move and adapt according to the function of the space. With Naava Skate, you can change their position whenever you want.

One product, many functions

Among being an air purifier, Naava can act as a beautiful eye-catcher and a space divider as well. As an optional feature, you can add even more functionality with a magnetic whiteboard.

Our experts will help you get started with your project. Contact us and we will get back to you as soon as possible!

pCon.Planner is a space planning program that allows you to design detailed space plans in 3D and visualize them in photorealistic quality. With pCon, you can plan, design, and present your projects with only one software, utilize a wide range of tools for presentation and visualization, and easily transfer your data to other CAD programs through file import and export functions.

A selection of innovative Naava solutions is now available for download on the 3D room planning software pCon.planner. You can browse and download the data via pCon.catalog.

In the Footsteps of Alvar Aalto: Interview with Esa Laaksonen

What comes to mind when you think about Finnish architecture?

Alvar Aalto was a master of functionalism, who aimed to design buildings that were as human-centered as possible. He believed that nature is a significant part of this human-centered, empathic architecture, which is why his buildings are usually, in one way or another, connected to nature.

"Aalto believed in a flexible separation of indoor and outdoor nature. For example, the Paimio Sanatorium was designed by him in a way that allowed patients to look out of the window even from a lying position. The sanatorium was also placed in the middle of a pine forest to maximize the patients' fresh forest air intake. It was always Aalto's goal to determine this distinction between indoors and outdoors and consequently, bring nature indoors."

Decision-makers worldwide are becoming more aware of the effects working environments have on employees and other stakeholders.

We are actually "genetically programmed" to prefer living amongst nature. Therefore, the absence of natural elements in indoor environments is bound to make us sick.

This desire to be in contact with nature is much in conflict with the past and current state of urban planning, where the focus has mainly been on designing buildings that are as energy-efficient as possible, often without taking into account issues such as nature-connectedness and sustainability. However, due to recent research and innovation, new planning trends such as biophilic design are beginning to emerge.

KIRAHub's Urban3 is a bright and fresh coworking space in one of Europe's biggest start-up hubs Maria01 in Helsinki, Finland. As an old hospital that has been transformed into office spaces, the building offers unique opportunities and challenges.

The renewal of the protected building was limited to the restoration and usage of smart furniture choices. Designed by Mint & More, inclusivity and sustainability are visible in the end result that aims to bring people together, inspire new ideas, and strengthen the community. Naava green walls are an integral part of the solution, providing versatility and bringing in the lush beauty of nature.