As IP services provider Kolster passed the baton to the next generation of specialists, the company also moved into a new office space. In cooperation with design and architecture firm Gullstén&Inkinen, the premises went through a change that is not only visible on the outside, but can also be seen in the organization itself. The design project is now a model example of the impact a space can have on the behavior of the people in it.

Turning over a new leaf

Kolster is an expert in intellectual property rights. This family business, with over 140 years of history in the industry, works in all sectors of patenting, trademark and IP law. As the company has been passed onto the next generation, its practices have also been updated to move with the times.

“In the future, robots will take care of a large portion of manual labor, giving our personnel more time and resources to focus on more complex and valuable work,” envisioned Timo Helosuo, the CEO of Kolster.

Robotics won’t be able to enter the areas of work requiring creativity and interpersonal skills - that’s what we invest in here at Kolster.

“When people are able to work in interaction with each other in a good environment, things move along faster and people feel more satisfied in their work. This then translates into better services for our clients,” explained Timo when talking about the motivation behind the revamped new premises.

Office tells the story of family

The fifth generation at Kolster wanted to kickstart the company’s journey to the top of the ladder in development with their new Chairman of the Board, Kim Kolster, taking the lead at the new premises. 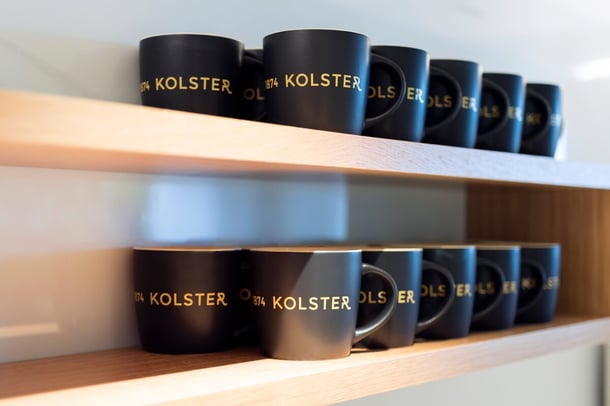 The new and exciting chapter in the story of the family can also be seen in the updated look of the brand.

After finding the suitable premises to call their new home, the company sought help from design and architecture firm Gullstén-Inkinen. The concept of the new design was based around turning the previous, traditional office space upside down. Now, instead of a dark space with enclosed workspaces along the sides of the walls and windows, there are big open spaces near the windows and enclosed, glass-walled workspaces in the middle.

The idea was to maximize the amount of natural light inside, and to be able to see through the building. We even chose glass walls and big windows for the enclosed workspaces to give light a chance to roam free in all parts of the office. The lit up Naavas also bring an added touch of natural light to the office, even during darker times of the year.

The gradient colored carpet of the enclosed workspaces continues outside of the rooms themselves. “When you are in the space, the visual effect of the carpet makes it seem bigger than it actually is,” explained Timo. At the same time, it makes the workspace a part of a larger entity.

A true testimony of the communality of the family. When the office project was finished, Kim Kolster was told that one of the graphic elements had Kim’s initials hidden in it. After a while of searching, they were found in a piece of artwork in the workspace, next to other symbols related to the company.

Transparency of space and practices

Not only did the premises go through a change, but so did the practices of the company. Whereas back in the day there was even an internal post service delivering paperwork between different floors and buildings, now everyone is sharing the same space.

“We are all together in one floor, instead of being spread out in two buildings and five floors. Our internal communication has been completely transformed: people can now see who’s around. Phone bills aren’t what they used to be, as we no longer have to call each other because colleagues are always close by,” described Timo.

The heart and soul of the office

The most noticeable difference between the old and new premises is the main attraction of the new space - its café, which is also known as the central lobby or kitchen. The purpose of the space serves one of the core values of the family company: interaction between people. 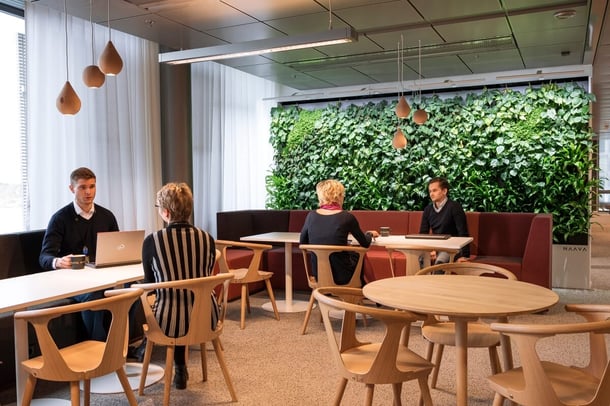 A usual day at work begins with people greeting each other over a cup of coffee. The entire Kolster family gathers around the ready-made healthy breakfast on offer. The area is surrounded by Naava smart green walls which add a fresh, green touch to the environment.

“At our previous office, we had six different kitchens and people went to shared breakfast in teams. Now, all of our personnel gets together in one shared space and gets to know one another. During the last year or so, we have recruited 15 new specialists and for them to be able to get settled into the company, it is crucial to be able to get to know their colleagues naturally over breakfast,” described Timo.

Once a month, the entire staff gets to take part in a webcast, where a giant silver screen is lowered down from the ceiling. Thanks to the adaptability of the space, all 80 members of staff can get together to take part in the webcast. “It’s not the same to have people watching the webcast in small separate conference rooms. Now we have a communal space where we can talk and look for eye contact,” stated Timo.

“This change really proves how much the space we’re in affects our behavior and interaction - massively.”

A homey atmosphere with living nature

Kolster was the first one to express their interest in incorporating Naavas into the new and improved space. Design architect Hanna Gullstén of Gullstén-Inkinen was fully on board with the idea from the start: “We were already familiar with Naava as we had used Naavas in some of our previous projects as well.

The process itself was effortless as Naava and Kolster had suggestions on where the smart green walls should be placed, which made it easy for us to include them in the sketches of the plan.”

The starting point for the placement of Naavas was highly visual:

“The idea was to center the greenery instead of having bits and pieces of it all around the office. We wanted to bring the Naavas together in full effect - into a space where everyone can see them on a daily basis.”

There are a total of four eye-catching Naava Designers in the space: two in the open café area and one at each end of the space. The placement of the smart green walls really makes it feel like nature is present throughout the entire floor; both in the heart of it and in the ends of it.

As the space doesn’t have a lot of traditional wall space to use, the modular nature of the Naava Designers enabled the green element to be fitted to the available wall space.

According to the design architect Hanna Gullstén, Naavas were the number one choice for bringing nature indoors: “Thanks to the Naavas, the green element is in one place as opposed to being spread around in pots here and there. This way as an interior architect, it was possible for me to make sure that the space looks like it’s supposed to even when it’s in use.”

“A green element looks much better when it has been carefully planned and centered in one specific spot.”

“I like the fact that Naava is so minimalistic. It only highlights the plants. We have used Naava in many different spaces. It never clashes with the space it’s in - it only brings out the beauty of the plants,” Hanna described.

This is how a Naava project proceeds

The only thing left for the client to do is to refill the water tank. With our Premium Service, this is included in the price.

Not your regular houseplant

“The most important thing about Naava for us is that people know and feel that we are investing in their well.being. We could always have artificial plants around the office but people know that the technology inside Naava is interesting - it is progressive, and that really adds to the experience with us as we also work in the field of innovation,” Timo explained.

He then went on to note: “People don’t always understand that if a workplace doesn’t have professionals taking care of plants, they can easily become a nuisance. Information security is highly important to us, which is why we don’t want different people coming in to water the plants and see which client projects we are working with.”

The included Naava Service guarantees that the smart green wall remains beautiful, which is a real benefit. Hanna Gullstén agreed: “No one in an office environment has the possibility or the skills to take care of green walls, or even plants, which is why Naava Service is such a big advantage.”

Sustainability through quality and design

“The space we’re in is a reflection of our values. We place a high value on quality and authenticity. However, at the same time, one of our family principles is to never show off,” told Timo.

Gullstén-Inkinen shares these values, and aims to create natural, sustainable spaces which stand the test of time. The starting point of their designs is to not only create a space according to the latest trends, but to design with sustainability in mind.

It seems that the company has managed to do just that in their 30 years of design. In a customer satisfaction survey, it was discovered that 80% of the spaces they have designed are still in their designed use.

A part of the sustainable design process of Gullstén-Inkinen is that the design architect maps out and photographs all the furniture in the old space. “We had direct suggestions of where to utilize which old pieces of furniture. The process was built into the design: if that’s not sustainable development, what is,” Timo stated when talking about the collaboration.

Quality and design stand the test of time.

Trends come and go but nature is forever

The project was focused around utilizing light, which is why it was natural for nature to be a source of inspiration in other parts of the office as well. As the space was designed in the fall, inspiration for the concept and colors was drawn from natural elements of the season.

For instance, the frame of the café area is created with Into Concept’s Point couches which come in the color of autumn leaves. In addition, the In Between tables and chairs by &tradition bring natural, wooden elements into the space. 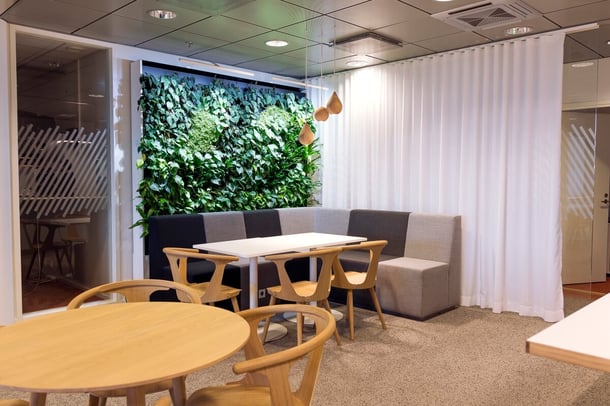 “An office with no natural elements would be quite bland and artificial,” contemplated Timo. Natural elements matter: “Naava’s plants bring a touch of nature to even the grayest of days, like today.”

The office is surrounded by windows, bringing nature close through the landscape as well.

“One evening I was leaving the office and saw the sun setting down, lighting up the entire space, the entire floor even. It is something I couldn’t even image,” Timo described in admiration.

“When it’s raining you feel as if you were inside a waterfall with the raindrops falling down the entire length of the windows. It is an interesting feeling, it’s hard to describe. It’s almost like being underwater,” told Timo.

With the right choices, you can feel close to nature even in the heart of the city.

What story does your space tell?

Contact us to talk more about bringing nature indoors.