How to increase well-being and productivity at the office?

Companies tend to rent office buildings for huge sums of money and pay renovation costs which often come with an even higher price tag. At the same time, the people who spend 8 hours a day in these buildings, the employees, are the biggest assets of the company, yet their well-being and productivity is not supported by the space.

Instead, we keep paying those building related invoices without blinking an eye. Should we rethink the way in which we invest in spaces where we spend our time?

Sven Ostner, Architect and Business Developer specializing in commercial spaces at ÅWL Arkitekter, agrees. “If you create an optimal environment for the employees, they will in turn do a better job. They become more creative and communication and productivity improve. That’s why companies also feel better when the employees do, which can have an effect financially as well,” explained Sven.

ÅWL Arkitekter are known for their residential projects, but want to start focusing more on office spaces. Consequently, they have taken up a concept called evidence-based architecture. It has its roots in brain research, psychology and the effect design has on us people.

The goal is to increase well-being, which also means improving productivity and happiness at work. Decreasing the number of sick leave days is closely related to this matter, too. “This isn’t just something we claim, it is argued for by about 200 research papers and PhD theses. This builds on proof - evidence. It is evidence-based,” stated Sven.

“I used to work with hospitals which utilized the concept of evidence-based design. The people there have experienced first-hand how space can affect people more than we realize. For example, in hospitals which are built according to the principles of evidence-based design, you get well quicker, have a lower heart rate and need less medication,” explained Sven. This knowledge is something that ÅWL now wants to incorporate in their office design as well. 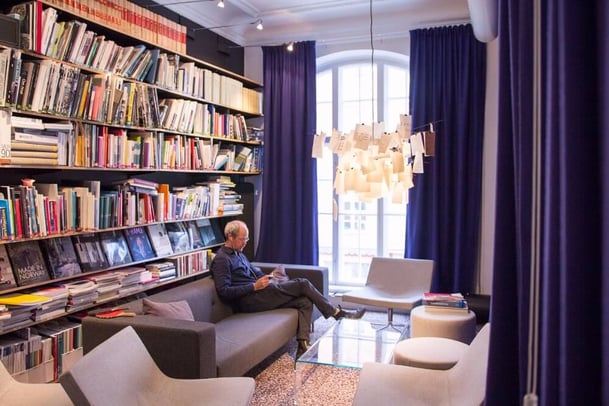 We humans crave for natural elements, even indoors.

We are not meant to live indoors

Elements, such as a room’s acoustics, colors and scent, are ones that affect our unconsciousness. They have an impact on us without us even knowing it.

“People only speak of function and design. We take things one step further and say that our consciousness sets the base for how we feel. This is a totally unique and new way to look at these kinds of things,” said Sven.

Although it is a new way of doing things, evidence-based design is not a passing trend. It’s based on how the modern human brain works, which is 400,000 years old. We have certain instincts that won’t disappear, no matter how much the world and society around us develop and change.

“At ÅWL Arkitekter, we want to make the indoors as good as the outdoors."

Light, colors and materials have a big impact on our general health and well-being.
Naava brings light and greenery into indoor spaces.

“Biologically speaking, we are just like people in the Stone Age. We are not adjusted to spending all of our time indoors, yet that’s where we spend up to 95% of our time. To solve this problem, we have to adjust the indoor environment to suit us. Naava creates the air quality we long for, but seldom get indoors,” explained Sven.

“Naava creates the air quality we long for, but seldom get indoors.”

Would you like to know more about Naava’s positive impact on well-being and productivity?

Contact our experts to discuss how Naava could bring an added level of comfort and well-being at your workplace.